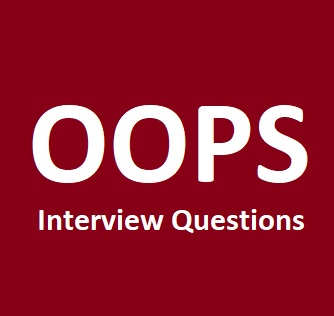 1. What is OOPS?
OOPS is abbreviated as Object Oriented Programming system in which programs are considered as a collection of objects. Each object is nothing but an instance of a class.OOP is a mechanism for creating logical modules, such classes that include fields, properties, methods, and events. The software creates an object to represent a class. As a result, an object contains all the characteristics, including data and behaviour, related to a class. OOP enables programmers to create modular programmes and put them together as software. Various software modules, including as classes, namespaces, and sharable assemblies, are accessed using objects to access their data and actions. Only OOP languages, including Visual Basic.NET, Visual C#, and Visual C++, are supported by the.NET Framework.

2. What is Polymorphism?
Polymorphism is nothing but assigning behavior or value in a subclass to something that was already declared in the main class. Simply, polymorphism takes more than one form.

4. What is operator overloading?
Operator overloading is a function where different operators are applied and depends on the arguments. Operator,-,* can be used to pass through the function, and it has its own precedence to execute

17. What is Inheritance?
Inheritance is a concept where one class shares the structure and behavior defined in another class. If Inheritance applied to one class is called Single Inheritance, and if it depends on multiple classes, then it is called multiple Inheritance. It is simpler to design and manage applications when we can declare a class in terms of another class . This expedites implementation time and offers the chance to reuse code features. Programmers have the option to specify that a new class should inherit the members of an existing class rather than constructing entirely new data members and member methods. The new class is referred to as the derived class, while the current class is known as the base class.

19. Explain the term constructor
A constructor is a method used to initialize the state of an object, and it gets invoked at the time of object creation. Rules for constructor are:
• Constructor Name should be the same as a class name.
• A constructor must have no return type.

24. What is the difference between structure and a class?
The default access type of a Structure is public, but class access type is private. A structure is used for grouping data, whereas a class can be used for grouping data and methods. Structures are exclusively used for data, and it doesn’t require strict validation, but classes are used to encapsulate and inherent data, which requires strict validation.

25. What are all the operators that cannot be overloaded?
1. Scope Resolution (::)
2. Member Selection (.)
3. Member selection through a pointer to function (.*)

26. What are a base class, subclass, and superclass?
The base class is the most generalized class, and it is said to be a root class. A Subclass is a class that inherits from one or more base classes. The superclass is the parent class from which another class inherits.

27. Which OOPS concept exposes only the necessary information to the calling functions?
Encapsulation

28. What is a class and object?
A class is simply a representation of a type of object. It is the blueprint/plan/template that describes the details of an object. An object is an instance of a class. It has its own state, behavior, and identity.

29. Define Destructor?
A destructor is a method which is automatically called when the object is made of scope or destroyed. Destructor name is also same as class name but with the tilde symbol before the name.

30. Can you inherit private members of a class?
No, you cannot inherit a class’s secret members as they are only available to members of that class and are not accessible to outsiders.

31. What are manipulators?
Manipulators are the functions which can be used in conjunction with the insertion (<<) and extraction (>>) operators on an object. Examples are endl and setw.

32. What is a friend function?
A friend function is a friend of a class that is allowed to access to Public, private, or protected data in that same class. If the function is defined outside the class cannot access such information. A friend can be declared anywhere in the class declaration, and it cannot be affected by access control keywords like private, public, or protected.

35. What are tokens?
A compiler recognizes a token, and it cannot be broken down into component elements. Keywords, identifiers, constants, string literals, and operators are examples of tokens. Even punctuation characters are also considered as tokens. Example: Brackets, Commas, Braces, and Parentheses.

40. What is a copy constructor?
This is a special constructor for creating a new object as a copy of an existing object. There will always be only one copy constructor that can be either defined by the user or the system.

43. What is dynamic or run time polymorphism?
Dynamic or Run time polymorphism is also known as method overriding in which call to an overridden function is resolved during run time, not at the compile time. It means having two or more methods with the same name, same signature but with different implementation.

45. What is Encapsulation?
Encapsulation is an attribute of an object, and it contains all data which is hidden. That hidden data can be restricted to the members of that class. Levels are Public, Protected, Private, Internal, and Protected Internal.

46. What is function overloading?
Function overloading is a regular function, but it is assigned with multiple parameters. It allows the creation of several methods with the same name which differ from each other by the type of input and output of the function.

47. What is the use of finalize method?
Finalize method helps to perform cleanup operations on the resources which are not currently used. Finalize method is protected, and it is accessible only through this class or by a derived class.

48. What is the main difference between a class and an object?
An object is an instance of a class. Objects hold multiple information, but classes don’t have any information. Definition of properties and functions can be done in class and can be used by the object.A class can have sub-classes, while an object doesn’t have sub-objects.

50 What does the keyword virtual represented in the method definition?
It means we can override the method.